Making the Most of Social Security

Know how to get a great deal on an annuity today? Tap your 401(k) or IRA for living expenses in your first few years of retirement so you can postpone taking Social Security.

Most people start their Social Security benefits as early as possible, at age 62, or at least by their "normal" retirement age, which is the age when they're entitled to "full," or reduced, benefits (currently 66 or 67 years old, depending on when you were born).

But for every year you defer past that, up to age 70, your Social Security benefits will rise by 6% to 8%. Those are real, inflation-adjusted rates of return, guaranteed by the U.S. government. Where else can you get a return like that these days with real interest rates close to zero? 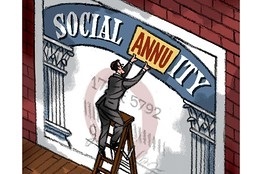 For average Americans approaching retirement with modest retirement-plan balances, he says, "by far the most advantageous thing you can do with that money in today's world is to defer your Social Security start date, even if you can only afford to do it for a couple of years."

If they both retire and claim Social Security immediately, they will receive a combined $27,000 a year in Social Security benefits, or $621,000 over both of their expected lifetimes.

If instead Dan waits until age 68 to start his benefits, and they use $45,000 of their retirement-account assets to tide them over, they could score an additional $93,000 in Social Security benefits over their expected lifetimes, effectively getting a 2-for-1 match from the federal government.

Meanwhile, Dan claims something called a "spousal benefit" for two years, which amounts to half of Jane's full annual benefit amount"in this case $6,000 a year.

Of course, Jane and Dan also must do something they're not necessarily anxious to do"namely, spend a chunk of their retirement savings up front in exchange for being more reliant on Uncle Sam in the future.

Many retirees are reluctant to draw down the nest egg they've spent a lifetime accumulating, let alone make themselves more dependent on a Social Security system they fear is hurtling toward bankruptcy.

But while changes, such as a rising full-retirement age, are pretty much a given for younger people, for near-retirees "the existing system will hold," reckons Mr. Jones. The challenge will be to wring as much out of it as you can.

"The idea is you can create a whole greater than the sum of the parts if you're smart about the way you spend your 401(k) money," he explains.

You may not have to spend all of it: The bigger your nest egg, the more leeway you'll have to defer Social Security all the way to age 70 or reserve some assets for emergencies.

"But the sequence of how you spend it can have a big impact," Mr. Jones says.

But by deferring Dan's Social Security start-date by two years and spending only $45,000 of their 401(k) and IRA assets"all in the first three years of retirement" the couple could generate household income of nearly $35,000 a year, an increase of 6%. Moreover, the income of the surviving spouse rises by more than 8%.

Note: It makes little difference when Jane starts her Social Security benefits, but maximizing the higher of the two benefits, in this case, Dan's"is a good deal for the couple and a great deal for the surviving spouse, whose benefits will be based on the higher amount.

Given that widows live on average 11 years, notes Mr. Jones, "it's important to the kids that Mom and Dad do a good job of this stuff."